Hot temps abated at the top of Moki Dugway and I enjoyed a cool ride along 261 to its terminus at UT 95. The remaining 55 miles to Halls Crossing became a convection oven, peaking at 103 degrees when I landed at the ferry ramp. 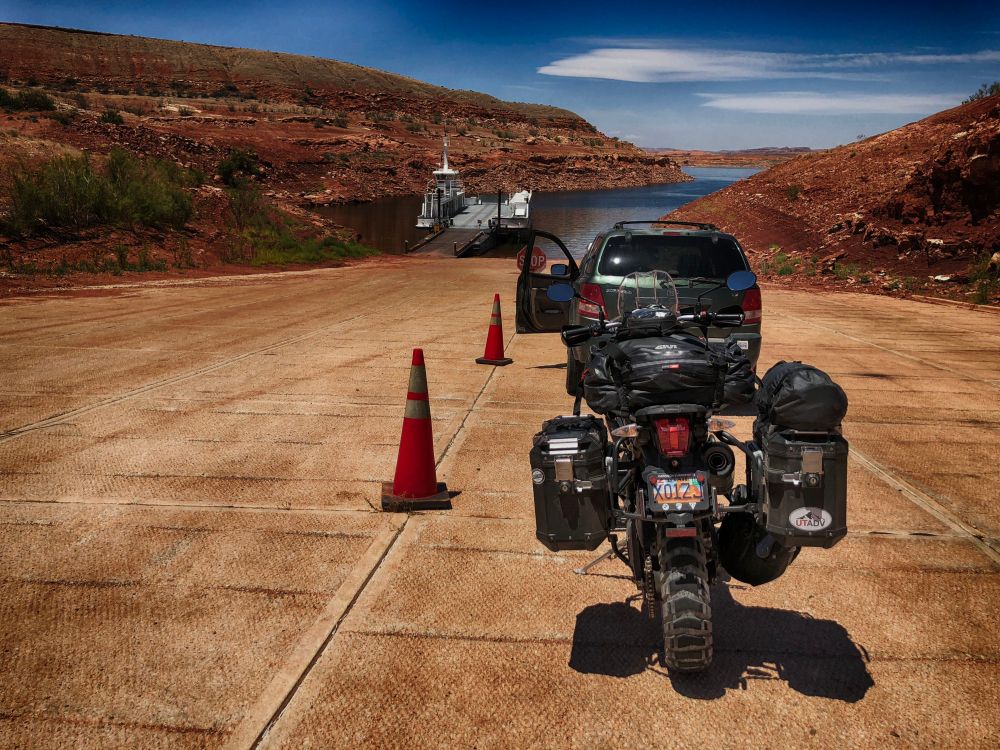 Fifteen bucks will get you across Lake Powell to Bullfrog. Actually, the ferry will. It costs $15.

The crossing takes around 25 minutes. I took some refuge in the shade.

Landing at Bullfrog felt even hotter. I found an empty picnic area where I made lunch, got rehydrated and draped my shoulders with my cooling towel, and made my way to the start of the Burr Trail.

Just beyond the turnoff to Bullfrog primitive camping (which is closed) is the beginning of the Burr Trail, a well-marked paved road, BLM 12000 that goes back into and then out of Glenn Canyon National Park.

This 78 mile road is paved right up to the boundary of Capitol Reef National park where it turns into a graded road.

The scenery is incredible, more rewarding for me than Valley of the Gods in terms of its geological variety. I didn’t stop but once before the Burr Trail Switchbacks to photograph it due to the heat, way past the century mark. I was pushing on to get to the cool air of Boulder Mountain where I’d be spending the night.

But before any of that I had to ascend the Burr Trail Switchbacks.

It’s graded with some mild technical rolling until right after a turn the surface turns to deep sand for about fifteen feet at a grade of at least ten percent. I didn’t have the momentum for both the sand and the grade and the Tiger stalled and started to slide. Can’t turn around, can’t go around, can’t back out and try it again. I stuck it in second, fired it up and powered it out of there to solid grade, stained sphincter notwithstanding.

Not far after the top of the switchbacks the road leaves the Capitol Reef NP boundary, turns to pavement and climbs and winds around Utah’s best kept secret.

The trail terminates at Boulder where I stopped at the Burr Trail Outpost and thoroughly enjoyed a lemon and mint smoothie.

I went on up Boulder Mountain and found a spot at my favorite small campground at Oak Creek, made camp, had dinner and listened more to the book that kept me company on this trip, Jupiter’s Travels.