I’ve been in between bikes for too long, which is long enough to question my skills, though I’ve been riding for more than thirty years. And that’s probably a good thing, taking toll of all abilities motorcycling. This isn’t something with which anyone wants to get completely comfortable.

Add a new bike to the fray and I feel like a first timer, almost, but not for long. UTADV is adorned with shots of the KLR and I’m grateful for the experience, cutting my off-road teeth on the 650. My first test drive on the Triumph Tiger 800XC paid off with everything learned on the KLR, but the great awakening was in realizing that there was so much more.

So what better place is there to initiate a sorting-out ride on a new motorcycle? Virgin, Utah. Not just Virgin, I had a few hundred miles in between, but it was a destination point on this commute between Bountiful and St. George.

I left Bountiful Monday the 26th. It was snowing. I slabbed I-15 for 320 miles, getting used to the Tiger’s freeway handling characteristics. I never took the KLR over 75MPH. The Tiger was fully loaded, about 70 pounds balanced, but I never felt the kit was back there. The Tiger was as stable as my Valkyrie Interstate and as responsive as my Blackbird all the while being more nimble and comfortable, without being a Honda. Go figure.

Besides sorting out the 800XC, I also dialed in my HotWired gear. And maybe this contributed to the overall favorable experience because I wasn’t freezing my ass off. Clad in my usual gear, adding the HotWired jacket and gloves gave me different settings underneath the Akito all-season shell and liners to keep me comfortable, even over mountain passes in the low thirties. And the new Shoei Hornet X2 helmet was incredibly more comfortable and quiet. You get what you pay for. I could listen to the Sena system at speed, something I couldn’t do in my GMax.

Once I landed in Southern Utah I pulled off at the second Washington exit and went north on the frontage road and stopped for my yardsale. HotWired gear off, liners off, balaclava off. Phew. Such as necessary in 50f degree temperature shifts. That’s when I noticed this area’s addition of a number trails that didn’t exists when I lived here a few years ago, so after I stripped down and a quick photo op, I decided to try out the Tiger’s new Metzler Karoo 3s off road. 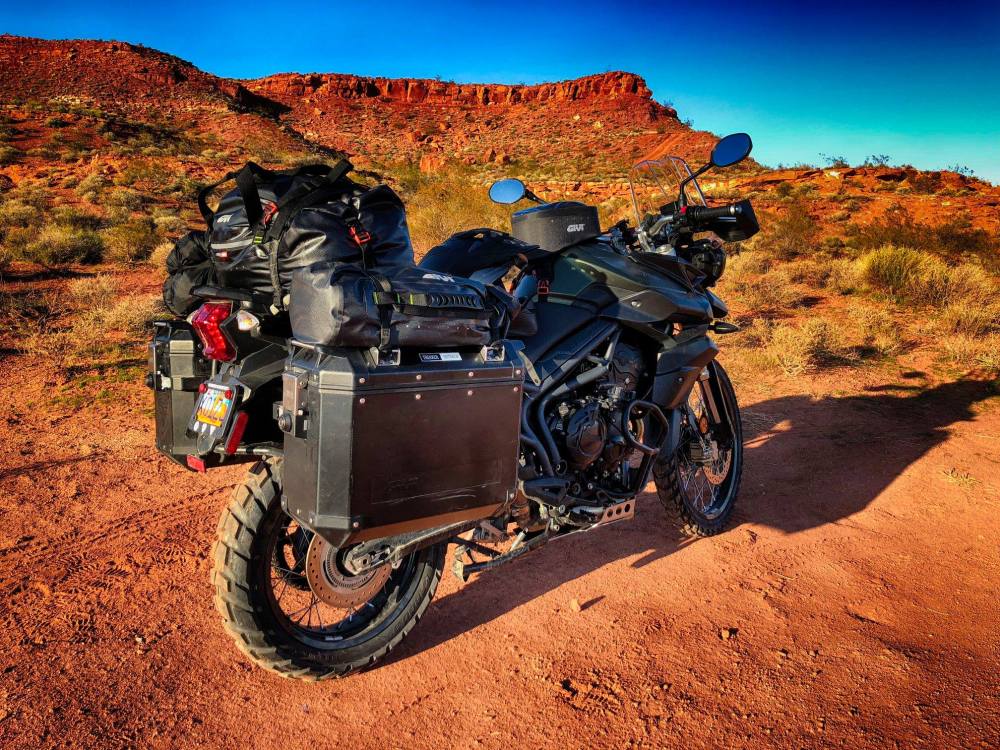 Check out my review of Givi’s soft bags. I hadn’t realized how the KLR conditioned me in my off-road riding. It wasn’t confidence inspiring until I upgraded the suspension, but even then I had a hard time giving the bike the benefit of the doubt in its off-road manners. KLR riders admit the 650 does both road and trail, it just doesn’t do either really well. The Tiger does. Finally, I’m enjoying the trails instead of enduring them. Didn’t take long to get away from my white-knuckle conditioning.

After class on Wednesday I packed up and took to more trails in Warner Valley, running the Tiger over and through every possible combination of dirt, clay, sandstone, mud, sand, gravel, rocks, larger rocks and limestone. Now I get it. 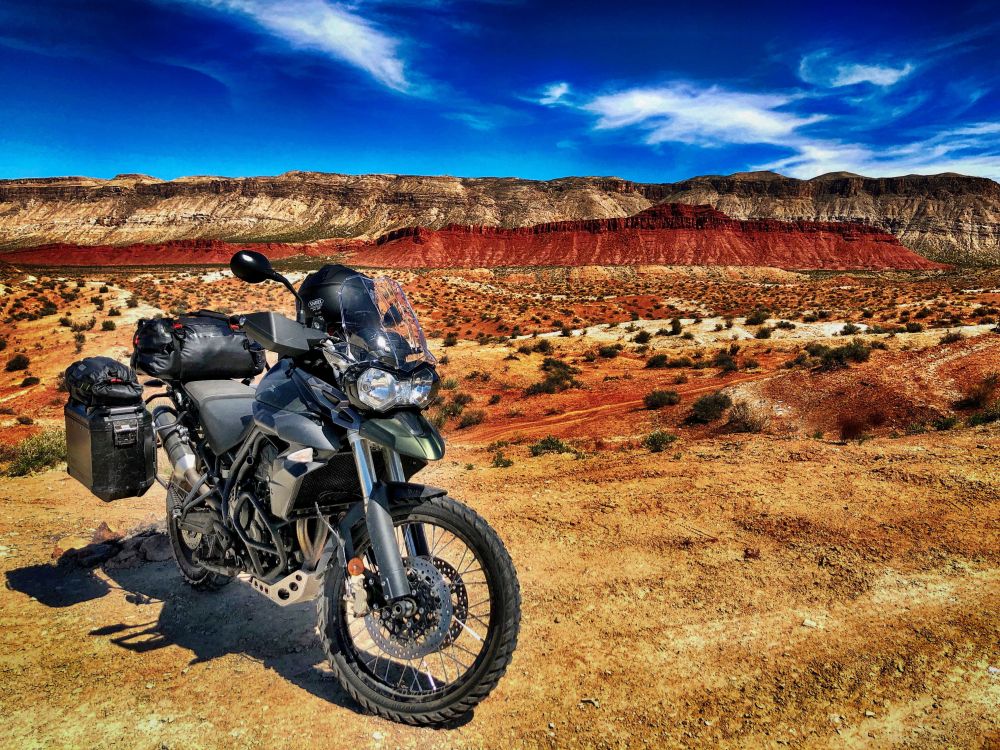 After traversing the valley I backtracked to my favorite haunt just above Sand Hollow reservoir where I’ve spent hours practicing on the KLR. Deeper ruts and sand these days, and washboards worse than ever, but the Tiger didn’t notice. 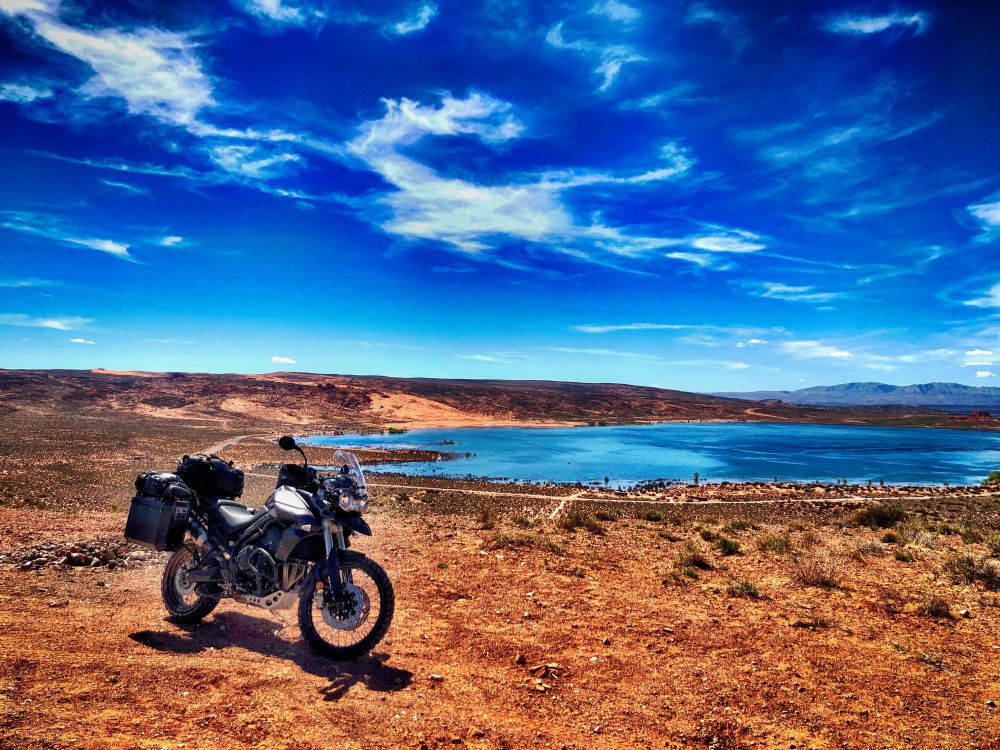 I doubled back to Hurricane to have lunch at the Main Street Cafe. While it’s been through a number of owners, it’s still worth a stop – solid bistro fare and a relaxed setting in Hurricane’s neighborhood.

After lunch I mounted Highway 59 out of Hurricane and turned at Sheep Bridge, a graded dirt road that cuts east through the planet’s best mountain biking network (home of the RedBull Rampage) and ends up at Highway 9 at Virgin, the road to ZNP.

There are a number of side trails off of Sheep Bridge, the majority of which are reserved for mountain bikes, part of the JEM system. I took the double track trail to the north to the Virgin Dam and found a secluded, slightly elevated spot with 360 degrees of awe, and made camp. I went back to Hurricane for some supplies, rode a few more eligible trails and settled in for the evening.

I’ve photographed here a number of times in every season and I’ve yet to be able to determine which might be a favorite.

I settled in, editing and posting pics from the day, talking with my spouse on the phone.

I then slipped into the ALPS Lynx 1 for the night. I think all my gear constitutes another person, so I’ll be opting for an ALPS Lynx 2 in the near future and let my overlanding daughter take the One. We’ll be riding together, just not soon enough.

I went to sleep at 58f degrees and woke up to 34f at 0600. I’m at a certain age where men need to pee more often than usual and that’s when I realized the thermal ability of the ALPS Lynx tent and my ALPS Desert Pine bag, cozier than I thought. I tucked back in and waited for sunrise.

Highway 9 to Springdale where I had a great breakfast at MeMe’s. Springdale is currently being repaved with single lane passages clogging up the Park’s only access. Better now than in May, I guess. There seemed to be the same amount of visitors. Hope they’re done in time for the actual tourist season.

In ZNP I made the usual stops along the switchbacks to the tunnel.

The only downside to taking Highway 89 north to the Wasatch Front is that in the time it takes you to get to Junction, the equivalent to Beaver, you could be in the Salt Lake Valley had you slabbed it on I-15. But, that’s not why we ride ADV.

I cut over to Scipio on Highway 50, pushing against a fierce headwind, the kind that drives your helmet through your forehead, and fought the crosswinds, semi-truck and RV washes until I hit the calming rush hour traffic in the southern part of the Salt Lake Valley and made it home on the road to Bountiful.