I’m not sure that this really even counts. In all the years and miles of riding, I’ve never laid it down. I’ve come close, like the time we lost the rear tire on a Valkyrie Interstate on Highway 12 south of Escalante at 60 mph. We were fully loaded with camping gear, two-up at arguably the farthest reach of help on Utah’s most scenic ride. 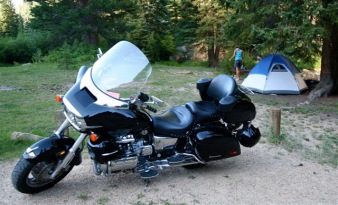 The tire violently blew out sending us fishtailing to the edge of the road where the drop-off, sans guardrail, would’ve ended our riding days, if not our lives. But I knew what to do and brought us to a safe stop, upright.

You can see Stansbury Island from one of my favorite photo points on the Great Salt Lake.

That’s it across the water on the right, not to be confused with Antelope Island to the north. While releasing the shutter on the Tiger on these concrete blocks I thought Stansbury would be the next place to explore for the day, maybe find a couple of photo points there, too.

I-80 west past Tooele, take the Stansbury Island exit and follow the signs. Stansbury Island is not to be confused with Stansbury park, a failed, early PUD, Utah’s first where someone thought Salt Lake City businessmen (this was in the ’60s) would prefer their personal real estate holdings in the west desert of the Great Salt Lake. They were wrong.

There’s nothing park-like about the island and to call it an island at all is generous since the GSL water levels began their retreat in 2014 revealing shallow channels turned holding ponds for local mining. The road is a low, earthen dike that’s well traveled by trucks commuting to and from the mines and turns to washboards with lose gravel as you get onto the island.

There are a number of mining claims that shut down exploring areas of the island with no trespassing and no entrance signs. There are a couple of hiking trails and double tracks leading to the water’s edge, like the one I was on when I laid down the Tiger.

I was standing, looking for photographic angles, when I drifted the Tiger off the compacted track and into the deep, soft sand in the middle. The front Karoo 3 dug in quickly and down we went. The RH side Givi pannier and mount took the brunt of the impact allowing me to clear my leg from the bike’s fall at maybe 20 mph. No big deal.

I hit the kill switch and stood up, trying to recall my training on righting a bike, something I’ve never had to do before. After my riding gear yardsale, and releasing the shutter on the angle I’d never considered up to that point, I tried the classic back-to-the-bike, grab the bike behind you and lift with your legs move, not even budging the Tiger.

Time to lose some weight. Off came the left pannier and Givi tail and cargo bags. If I could lodge the rear tire back into its terminal track and push laterally as I’ve seen in YouTube clips, that might give me the leverage needed to right the bike. I put the kickstand down, made sure it was in gear, knelt down at the side of the bike facing the seat, found two solid grip positions and push forward against the bike, digging in with the traction of my boots, and up the Tiger went until it gingerly rested on its kickstand.

I pucked the stick and inspected the machine, especially vulnerable points around the radiator and brake lever, neither of which ever made contact to the ground. The handlebar and pannier took that energy very well. No damage. Even the pannier mount held it’s original shape.

Save for the truck drivers, Stansbury Island was abandoned, making this situation a little more precarious for me. I was alone out there, or so I thought. Look at the image above and see the fresh tracks of a cage that recently passed through. Once I got all my shit together – on a number of levels – I kept riding out into the eddy to see what might be out there. 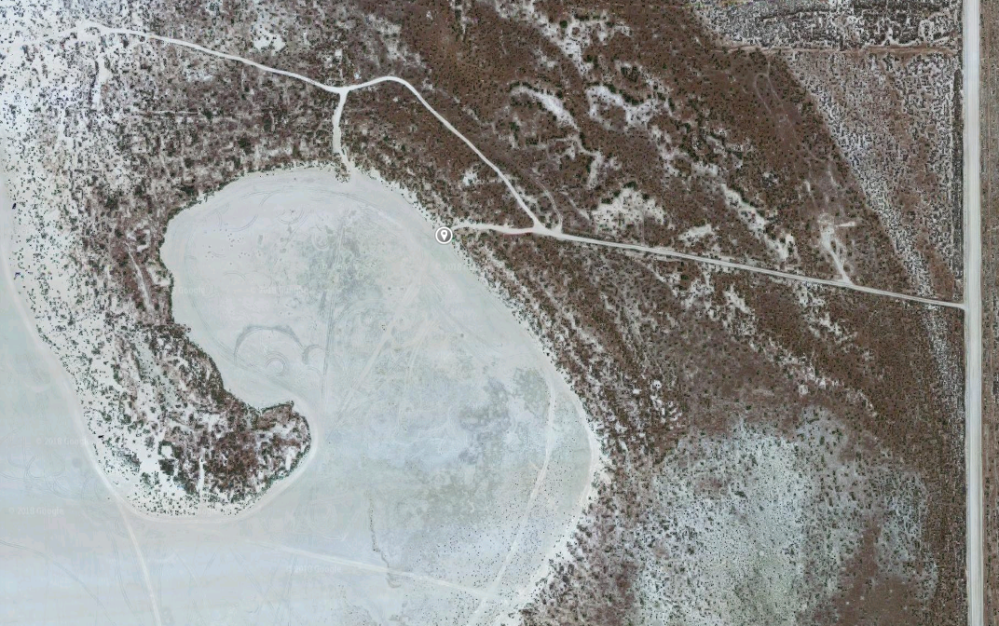 This is where I discovered I wasn’t alone as I thought, though the good souls visiting the eddy would not have been ideal to ask for assistance since they were all naked. Yep.

Aside from the visitors au natural, the eddy was a great place to practice sand skills and find a couple of angles that would make this experience memorable.

I don’t often take a selfie with my bike, but when I do I sit right in the middle of the frame.

I’ll be back here looking for better light and a place to camp.

But I’ll go for the clothing option. 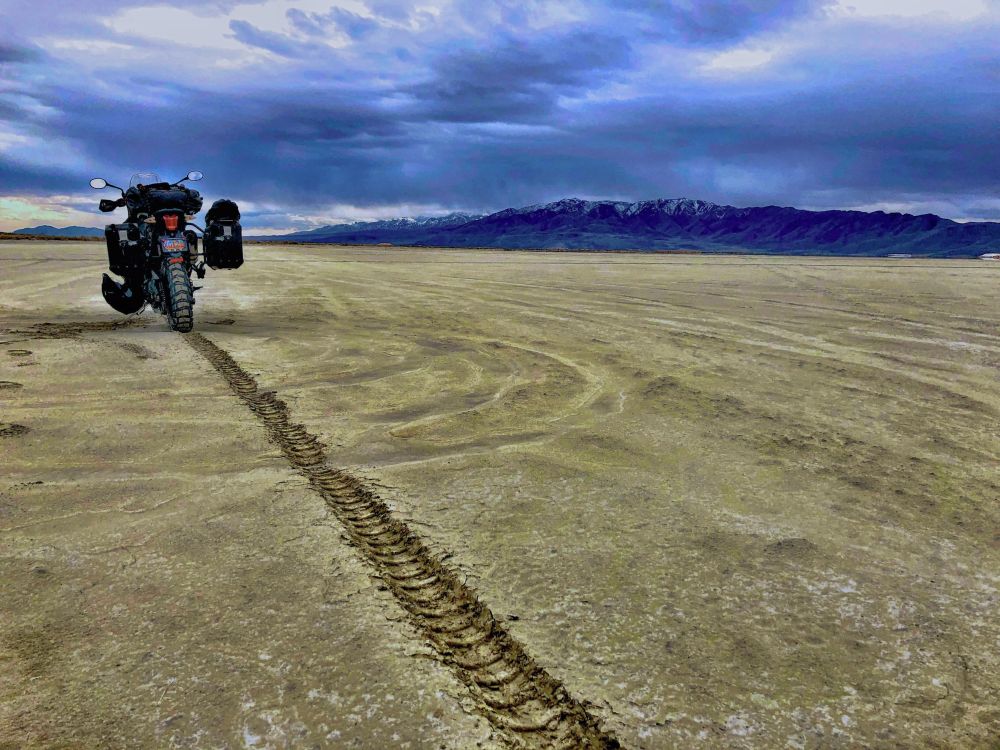