There’s a go-to spot where I camp when I’m in Southern Utah that isn’t in Southern Utah, it’s in Northern Arizona, on the Arizona Strip. If you wanted to split coordinates, it’s right on the border.

During the colder months I camp there in the Nomad, a prepped overland 1998 Montero that’s equipped for long-term trips with quick set-ups and to accommodate two adults and two Golden Retrievers.

All the luxuries of home. Camping with the Tiger isn’t quite at this glamping stage, but I’m just as comfortable.

Many assume this particular area on the Strip is BLM land, and it’s not. It’s managed by Arizona’s Public Schools Trust and if you want to bivouac here, you’ll need a permit, $15 for a year. I can’t think of a more reasonable fee. And there’s some rules that go along with camping there and you can check those out on the link.

I got to my usual spot late Tuesday evening at golden hour. The Tiger tends to draw attention and when I was packing up trying to leave campus, it attracted a couple of enthusiasts and before I knew it we had talked the evening away and I got distracted from my packing ritual.

Assuming all was secured and ready to roll, I mounted the Tiger and made my way to the border when my Givi cargo bag holding my camera gear – typically lashed to the right pannier – launched from its perched and landed hard at 30mph and slid for a distance, cars behind me honking and dodging the bag. I heard the first honk just as the bag fell, knowing full well why they were alerting me. I was able to spin around, park, run into the road and retrieve the before anyone hit it, fully expecting to hear broken glass when I picked it up.

I didn’t open it until I reached my camp site. Its skid must have been pretty significant judging by the road rash. I shoot only prime lenses, and the inner bag in which they’re kept along with the body isn’t all that protected, so it was great relief to find that everything was in tact and functioning. Time to rethink the packing ritual.

I set up camp, breaking in the new Alps Lynx 2 backpacking tent, doubling interior space from the Lynx 1, made dinner and called home.

Before I turned in for the night, I released the shutter. 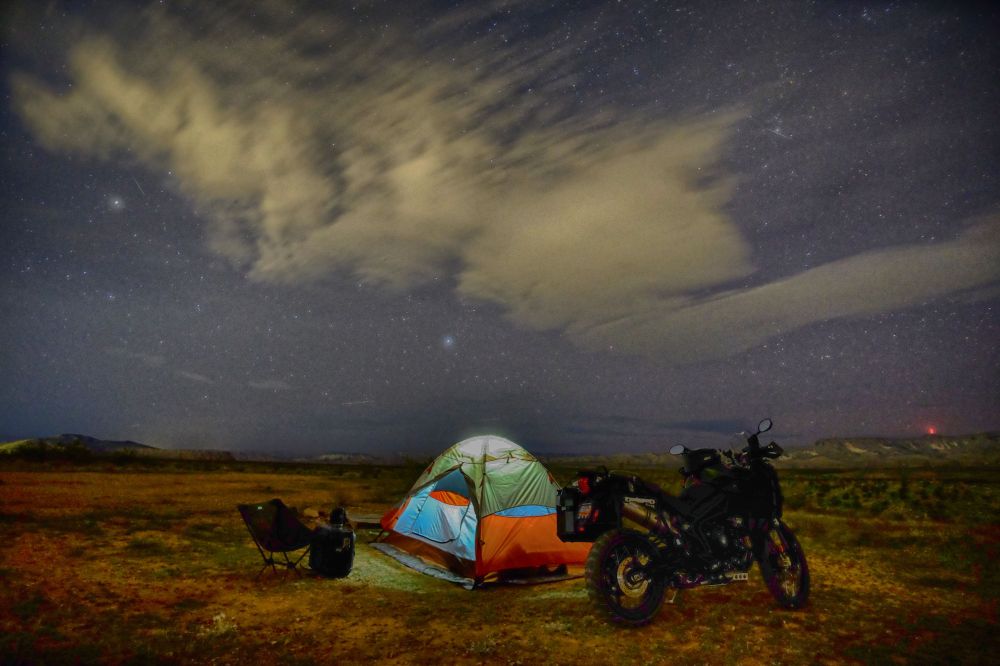 Look closely and you can see the REI Flex Lite chair, the pannier turned table, and the considerably lager size of the tent. Once I got inside it felt like a suite. I pulled in the chair and sat and processed images (any light out there attracts moths and other insects by the hundreds). And there’s nothing like slipping into a new sleeping bag. I swapped my winter bag out with a new REI Helio 45degree down sack along with a Sea-to-Summit Thermolite Reactor liner if things got too chilly. They didn’t. I use an ExPed SynMat 7 pad and a Teton inflatable pillow. Both the pillow and the pad have micro-fiber filled membranes that keep them insulated, warm and comfortable.

All camp gear packs into the right pannier in two layers. The bottom layer seen above stows the ExPed, the Teton Pillow and the Helio bag.

In the panniers lid is a Camillus Camtrax 3-in-1 hatchet retained by shock cord that’s webbed around tabs build into the pannier lid.

It’s always a bonus to find kit that serves more than one purpose, and that’s what makes this tool indispensable to my camp gear. 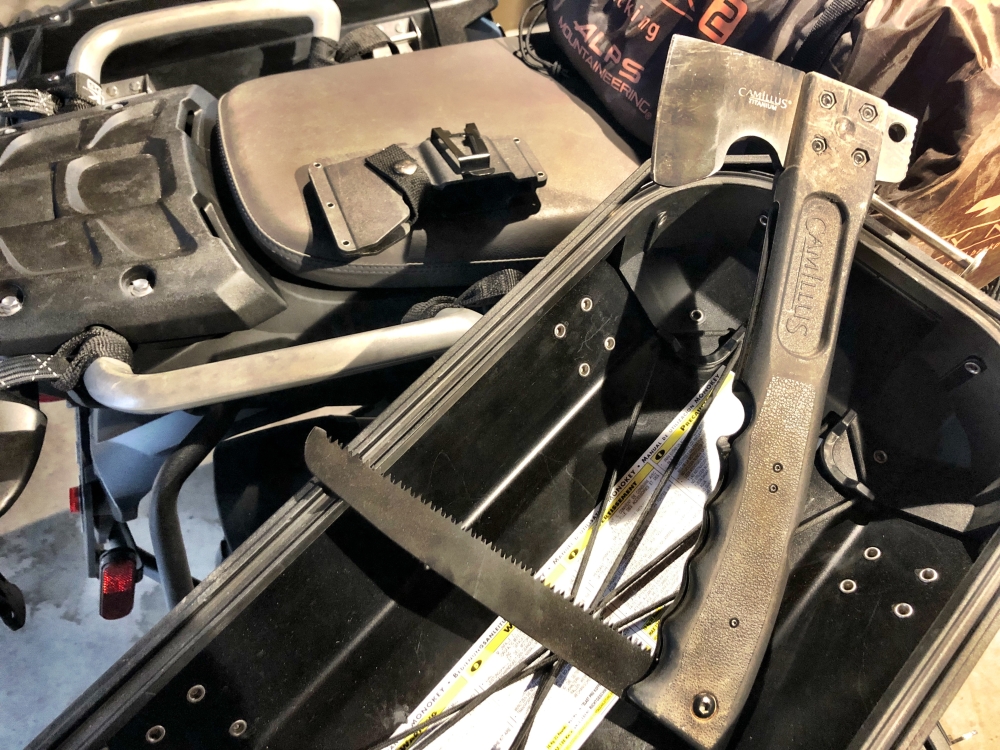 The hammer drives in tent stakes, the hole in the head pulls them out, and the hatchet and saw work great to harvest fuel for a fire and provide one of three items of personal protection. So, there’s a peak behind the pannier.

Wednesday after classes I was going to roll on to Las Vegas and check out another Tiger, this one an XR for my daughter, but news of a big storm rolling into the Salt Lake area on Thursday changed those plans, so I turned the Tiger north on I-15 instead to beat the foul weather home.

At Cedar City the Tiger’s tachometer cluster lit up with warning lights – coolant temp, oil pressure, engine light – and the temp gauge was flashing, one of those sphincter moments, especially at freeway speeds in traffic. Merde.

I pulled off at the next exit and into the parking lot of a Pilot station and let the Tiger cool down. I checked levels and saw an empty coolant reservoir. Not good. Checking Google Maps I found a Honda shop two and a half very long miles away and limped there. Not the best choice and a big risk to damaging the engine, but the Tiger ran like nothing was wrong.

Ron’s Sporting Goods in Cedar City is the area’s Honda dealer and that’s where the Tiger landed since I used to bleed red before green. Their service writer and mechanic got me right in, I unloaded the bike and with a few minutes they discovered the issue. 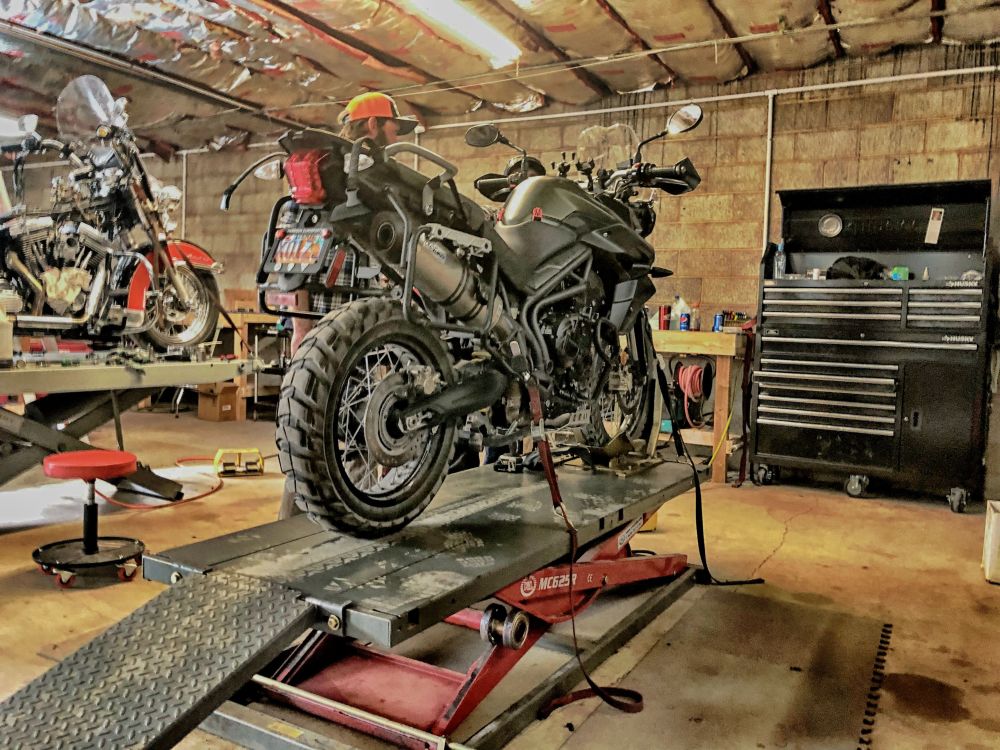 The radiator cap lost its ability to maintain pressure and all the fluid was forced through the expansion tank and out the drain tube that voids beneath the bike. A new cap, a Honda part for a CB 1000, was fitted and coolant was added. We ran the bike, checked hoses for heat and I was back on the road, fighting the 50mph gusts and crosswinds from Cedar to Fillmore.

It’s been my experience in traversing this State that there are two black holes of mechanical disruption, and one of those is Cedar City, so it’s good to know that in a bind, these are the guys to go to.

The Triumph and I made the rest of the trip back to Bountiful without incident despite Mother Nature’s attempts to blow me off the road. I thought while I fought the crosswinds’ relentless rattling, why do I subject myself to this? These conditions, the mechanical panic of being stranded, or having critical gear fly off the bike due to my own stupidity, contribute to hitting that borderline of tolerance.

And then I thought to how I felt earlier that morning, having packed up the bike and leaving the high desert descending the hilltop and back into the valley, crossing the border and remembered; that feeling of getting back on your motorcycle early in the morning to face what the day’s going to bring, saturated with cool air and Spring’s olfactory onslaught, all moved along by a twist of the right hand. Nothing comes close.